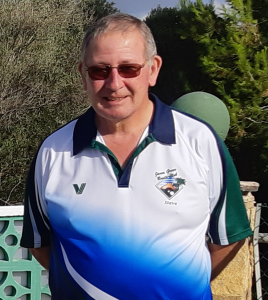 Meet at Teulada Car Park 8.30am

Due to Social Distancing a Full Squad Photo is Not Possible In case of inclement weather:- Our match against Finca Guila has been cancelled because of the suspension of the Northern League. No decision has been made yet as to when this situation will be reviewed.

Another glorious day saw us travel to El Cid for a match against the Sabres, the team currently top of the league.  Mike Gilbey’s team started quite well and after 7 ends were leading 9-4, unfortunately they lost the next 8 ends some of which were heavy scores and although they rallied towards the end of the game, went down 15-30. Dave Ings team, in a low scoring game, bowled really well and after 16 ends were leading 14-11 but unfortunately, the Sabres won the last 2 ends to win by 1 shot, very unlucky. Jill Nobbs team, in an even lower scoring game, slugged it out with all but 2 ends being won by 1 shot only. Coming into the last end, the Sabres were leading by one shot but another 1 shot win saw the Onyx team manage a draw, winning our only point, well done to them. Brian Walker’s team faced arguably the top Sabres team skipped by their captain, Yvonne Briden and aquitted themselves really well but in the end, a 6 conceded on the 11th end proved to be the key score and although 6 out of the last 7 ends were won by Brian’s team, the Sabres held on and we went down 14-17.

The Challenger team, skipped by Pete, were in a very hard fought game with some really tight ends but held their nerve to run out 14-11 winners. Well done to them.

On paper, a 2-8 loss doesn’t seem too good but the match was hard fought and after 9 ends we were leading on 3 rinks and the challengers game but then the wind dropped and Opal found their form. I will only single out one game and that was Mike, Dick and Tony on rink 4 who managed to win their game on the last end by one shot, well done to them.

There were some really gritty performances from the rest of the team which was very pleasing against the team who are expected to win the Northern League so well done to everyone.

Another pleasant sunny day for our visit to BBC for our match against the Jaguars. It was played in a good spirit but unfortunately we didn’t get the result that | thought we deserved, losing 2-8. Brian, Steve and Angela fought a close game but unfortunately dropped a 6 at a crucial stage of the match and didn’t have enough ends left to claw it back, going down 14-21. Mike, Dick and Tony fought well against a very experienced team and to be truthful weren’t able to keep up with them, going down 10-25. Dave, Mark and Jean bowled very well and deserved their 19-15 win, well done. Jill, Phil and Betty started well and looked to have the measure of the opposition but then the wheels fell of half way through the game and although they fought back well went down 15-18.

The Challenger’s first outing this season saw 3 bowlers bow together for the first time and after a shaky start, fought back and finally won 16-14 after scoring 3 shots on the last end, well done.

Our first match of the season saw us travel to Calpe for what is a difficult fixture and we came away with a 4-6 result that we would all have taken before the match. The notorious rink 1 proved as difficult as ever and Mike, Dick and Tony started well and after 11 ends were 10-4 ahead but a spirited fight back saw Calpe lead 11-12 after 16 ends. Some excellent bowling over the last 2 ends, winning by 1 and 3 shots respectively saw us come home 15-12 winners. Rink 2 proved a very difficult game for Brian, Steve and Angela and after a slow start got to 8-11 after 12 ends and the match seemed finely poised. However, the Calpe trio then won 5 out of the last 6 ends resulting in a 9-19 loss, a score that didn’t reflect how hard fought the game was. Rink 3 was a topsy turvey game with Calpe racing into a 1-11 lead, however a 7 on the 5″ end narrowed the gap to 8-11, Calpe than won the next 6 ends to once again open a commanding lead at 8-21 and although Dave, Mark and Jean fought well over the last 7 ends, they couldn’t claw back the deficit and went down 17-25. Rink 4 proved to be a very exciting and closely fought game, Jill, Phil and Betty fought hard throughout and were leading for most of the game. On the 17″ end, leading 24-17, victory seemed assured but dropping a 6 on the last end set the heart racing, a 24-23 result was very welcome and clinched the 4 points for Onyx.

* UPDATE – Due to Calpe fielding 2 non federated members, this match has been awarded to Onyx 8-2

We were blessed with another fine morning for this “friendly” match, any JGBC v JGBC team fixture always has an edge and so it proved to be, the match was played in a good spirit but both teams wanted to win. As it happened, Onyx came out on top and from my viewpoint on rink 5, there were some very tight heads with skips making numerous visits. It was pleasing to see all Onyx teams concentrating for the 18 ends and never giving up, the prime example being Brian Walker’s team who trailed for 15 ends but clinched the win in the last 3. This performance bodes well for when the Northern League re-starts.